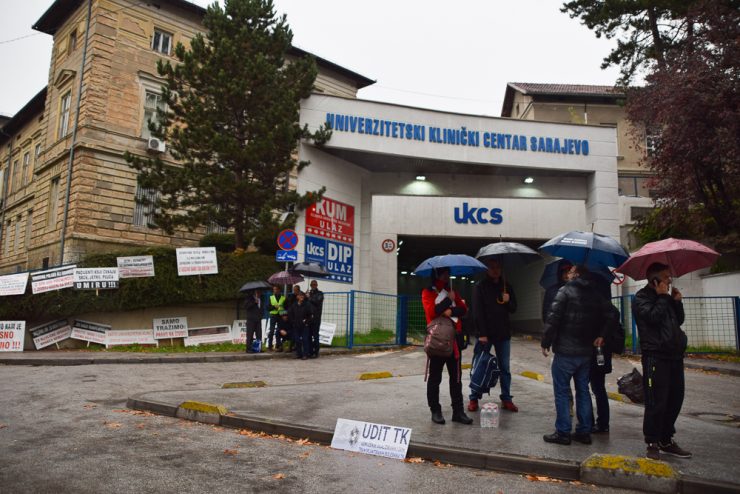 Let that sink in for some time. There is so much to say about this one fact. And it certainly explaines why the streets in Sarajevo are notably emptier than those in Utrecht, the city I live now.

The Federation of #Bosnia–#Herzegovina currently has more ministers than respirators. If you ever needed a more compelling reason for reforming #Dayton. #Coronavirus pic.twitter.com/20oLDysnHq

Because of the measurements to stop the spread of corona, I’m currently not residing in Bosnia, but in Netherlands. And because of that, I can’t really do reporting from the ground, so why not start blogging.

Back to the respirators. As you can see in the above tweet, the Federation Bosnia and Herzegovina currently has 142 ministers and 141 respirators. Both numbers are disturbing and together I might say they are alarming.

The federation is the part of Bosnia where mostly Bosnian Croats and Bosniaks live (the other part is Republica Srpska, with mostly Bosnian Serbs). This federation is divided into 10 cantons, which have some kind of autonomy on some policy areas. And these cantons also have their own ministers, resulting in, depending on whether you include also those with only coordinating tasks, 12 to 14 ministers of education Bosnia. And that is only one policy area. This explains why the total adds up to 142 in the federation. This complex construction is a result of the Dayton Agreement, which ended the war in Bosnia in 1995.

So you can imagine a lot of money is spent on governmental institutes. I’ve never tried to calculate what percentage that is of the whole budget (If someone has, please let me know), but I’m pretty sure it’s a lot. Which means less money is left to spend on public goods. There are numerous examples that illustrate the poor state of healthcare. Last October I met Mihneta, who lost her 26 year old daughter because she couldn’t get a kidney transplantation in time. A handful of people gathered at the Kosevo hospital in Sarajevo to ask for awareness of this problem with old dialysis machines and the minimum of transplantations that are taking place. In November people went to the streets protest against abuse at a home for children with special needs. After pictures of children tied to furniture were spread on the internet, it became a nationwide topic.

A bit over 3 million people live in Bosnia and the country has 141 respirators. So imagine what a disaster it would be if there is a real outbreak of covid-19. Untill now there are 1269 confirmed cases and 47 deaths and the situation seems under control, which is also because people take precautions themselves. They really don’t want to get sick. As my Bosnian language teacher said: “We actually don’t need the rules. If death doesn’t scare you, I don’t know what will keep you inside.”

The social isolation reminds many people in Bosnia about the war. About being in quarantine for almost 4 years. In basements, without gas and electricity. And without mobile phones. And with an enemy that you could actually hear or even see. The difference is that staying inside can now actually save lives, not only your own. So that is what people do.

This year it’s 25 after the war. Maybe it’s also time for Bosnia to finally get rid of the horrible governmental structures and work on the future of this country.